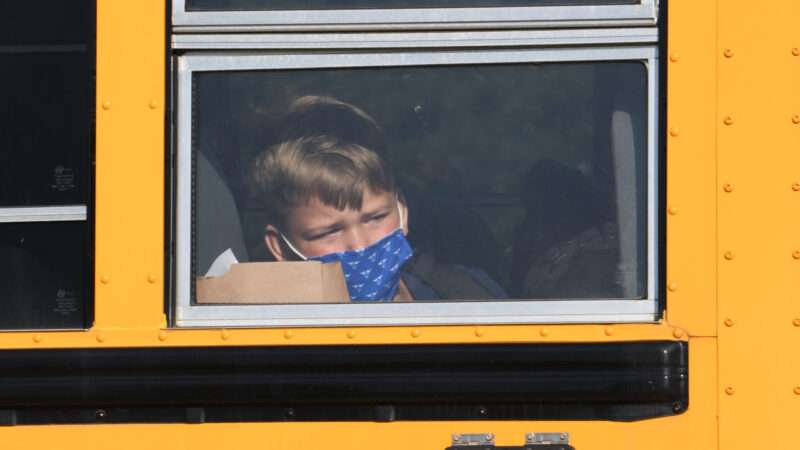 "More and more people are seceding from the pandemic, basically saying, 'Well, we've got a better idea of what the risks are for us personally. We now can calibrate…more of the risks that we want to take. As that happens, more and more people will be able to leave the pandemic behind as we go forward into the next year," says Reason Science Correspondent Ronald Bailey, who has written provocatively that the pandemic will end when "we decide to stop paying attention to it." But will authorities at the local, state, and federal levels allow us to get back to our lives?

For the past two years, no topic has dominated our lives like COVID-19, the respiratory virus that has killed 820,000 Americans and triggered lockdowns at work and school, travel restrictions, vaccine and mask mandates, massive levels of new government spending during peacetime, and other big and small interventions into our everyday lives.

We've also responded to the pandemic with heroic measures such as the historically fast development and deployment of safe and effective vaccines and therapeutics and an increasingly healthy skepticism toward state power. In 2020, the first year of COVID, Gallup reported that fully 54 percent of Americans said the government should be doing more to solve our problems, only the second time in 30 years that a majority called for more state intervention. But after another year—and another unpopular president at the helm—the situation has reversed back to historical patterns, with 52 percent now agreeing that "the government is trying to do too many things that should be left to individuals and businesses."

So how and when will the pandemic—and all the policies, good and bad, that have followed—finally end? I sat down with Bailey and Reason Senior Editor Jacob Sullum to talk about the uselessness of more lockdowns and mandates in the wake of ubiquitous vaccines, how the politicization of public health has rightly driven down trust in medical experts, the ongoing failure of the FDA and other government agencies to rise to the occasion, and the troubling turn of many people, including libertarians, into full-blown anti-vaxxers in the wake of so much misinformation coming from official sources and activists alike.

Sullum, who writes about public health, sounds a cautious note about the legacy of COVID-19. He says that COVID-19 is the sort of emergency—an airborne respiratory virus—that, from a libertarian perspective, government has a legitimate role in combating. But he worries that we'll forget how various levels of government overreached and exceeded legitimate functions of the state with no increase in positive outcomes. "We'll have more emergencies in the future," he says. "We could have a life that's just filled with these sort of rolling emergencies that justify what are no longer extraordinary exercises of power, but just [become] standard operating procedure. I don't think that adults will respond that way because they remember what it was like beforehand and they understood the transition. Younger kids might, if that's mostly what they've known. So I have a hope and a fear."

The post Why the Pandemic Will End Only When We Demand It's Over appeared first on Reason.com.

6d ago6d ago
Subscribe
Unsubscribe
주마다+
OPB Politics Now is a weekly podcast that takes a deep dive into the hottest political topics in Oregon and the Northwest. Every Friday, OPB’s political reporters and special guests offer in-depth analysis, discussion and insight into candidates, events and issues.
T
The Skepticrat