The Reason Interview With Nick Gillespie « »
Rachel Laudan: Why Thanksgiving Dinner Is Served All at Once 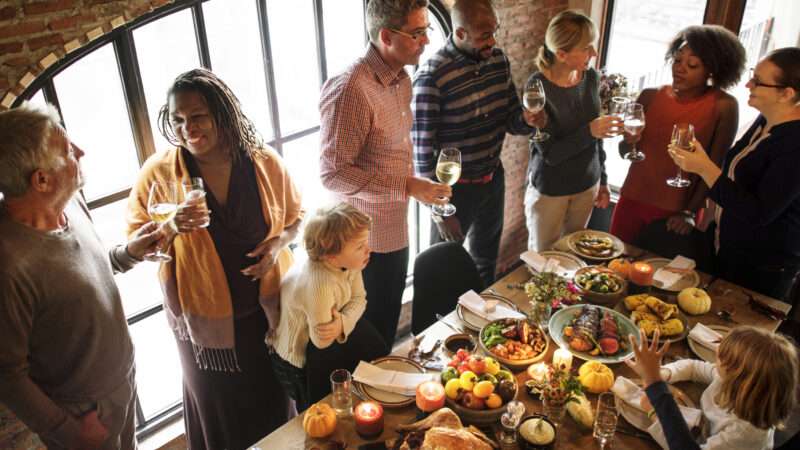 Have you ever stopped to think about why all the food at the traditional Thanksgiving dinner gets put out at the same time? No courses and no servers—just a culinary dump of turkey and all the fixings onto the table and an ensuing feeding frenzy.

As food historian Rachel Laudan explains, both what gets eaten at Thanksgiving and how it gets served is no accident. When Thanksgiving became a national holiday back in 1863, the Cuisine and Empire author says, its creator explicitly conceived of the day as a repudiation of European customs, particularly those steeped in class-based French origins. Sarah Josepha Hale designed the standard Thanksgiving meal as an affirmation of our (small "r") republican virtues. Turkey was cheap to procure, pumpkin pie was easy to make, and cranberry sauce was a simple take on the fancy toppings typical in a French court.

The meaning of Thanksgiving has changed over the years—thanks in part to Julia Child's successful effort to democratize French cuisine—but even today, "nobody suggests adding truffles to your turkey," says Laudan, who wrote about the politics of Thanksgiving for the Boston Globe.

Back in 2016, Nick Gillespie interviewed Laudan about the meaning of Thanksgiving, why she is not a fan of "organic" food, and other aspects of culinary history. It's a great conversation that is every bit as filling as Thanksgiving—and a lot less coma-inducing—and Reason is happy to share it again on the eve of Thanksgiving in 2021.

The post Rachel Laudan: Why Thanksgiving Dinner Is Served All at Once appeared first on Reason.com.

6d ago6d ago
Subscribe
Unsubscribe
주마다+
OPB Politics Now is a weekly podcast that takes a deep dive into the hottest political topics in Oregon and the Northwest. Every Friday, OPB’s political reporters and special guests offer in-depth analysis, discussion and insight into candidates, events and issues.
T
The Skepticrat