Hmmm there seems to be a problem fetching this series right now. Last successful fetch was on March&nbsp23,&nbsp2021&nbsp00:55 ( 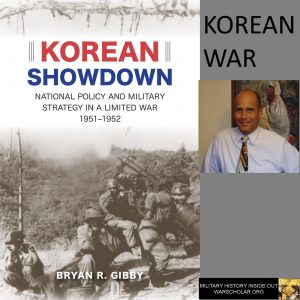 Check out this book https://amzn.to/3aQv7bA

Bryan R. Gibby is a US Army colonel and an associate professor at the US Military Academy at West Point,a s well as acting deputy head of the Department of History. He spoke to me about the Korean War and his book on the subject.

(THE AUDIO PLAYER IS AT THE BOTTOM OF THE POST.)

Martin Cooper talks about inventing the cellphone at Motorola http://spacewalksmoneytalks.com/p/728

Note: I had to stay pretty quiet for this interview because I was getting feedback that you can hear most of the time after I speak.

1:17 – Bryan talks about why he wrote on the Korean War. he explains the problem that existed during the war.

7:012 – Bryan talks about what Truman’s situation was during the Korean War and his dealings with the United Nations.

13:10 – Bryan talks about Truman’s military experience and his approach to military affairs.

25:18 – Bryan talks about the morale of the North Koreans and the Chinese.

38:35 – Bryan talks about an operation against North Korean hydroelectric dams.

40:56 – Bryan talks about some of the US Navy contributions to this operation.

44:19 – Bryan talks about the resources he used for research.

50:12 – Bryan talks about US Operation Eveready to take over the South Korean government.

1:00:54 – Bryan talks about the options Eisenhower had when he went to Korea to end the conflict.

1:15:41 – More information on the book can be found at the University of Alabama Press.

Martin Cooper talks about inventing the cellphone at Motorola http://spacewalksmoneytalks.com/p/728

Check out this book https://amzn.to/3aQv7bA

As an Amazon Associate I earn from qualifying purchases.

2d ago2d ago
Subscribe
Unsubscribe
매달+
The Birdy Num Num Indian podcast is all about inspiring the creative Indian.With over 35M views online spanning a career in IT and Stand Up Comedy, Indian-American comedian Sanjay Manaktala is the epitome of "because life begins after engineering." A good chunk of his guests also live by this philosophy. Every Monday and Thursday Sanjay talks creativity, dating, technology, life, current events and general life advice from the perspective of a 30 something Indian American guy traveling the w ...
B
BackStory

10M ago40w ago
Subscribe
Unsubscribe
매달
BackStory is a weekly public podcast hosted by U.S. historians Ed Ayers, Brian Balogh, Nathan Connolly and Joanne Freeman. We're based in Charlottesville, Va. at Virginia Humanities. There’s the history you had to learn, and the history you want to learn - that’s where BackStory comes in. Each week BackStory takes a topic that people are talking about and explores it through the lens of American history. Through stories, interviews, and conversations with our listeners, BackStory makes histo ...
T
The History of Rome

3+ y ago3+ y ago
Subscribe
Unsubscribe
매달
A weekly podcast tracing the history of the Roman Empire, beginning with Aeneas's arrival in Italy and ending with the exile of Romulus Augustulus, last Emperor of the Western Roman Empire. Now complete!
T
The History Network

12d ago1w ago
Subscribe
Unsubscribe
매달
The military history podcast specialists, looking at all aspects of war through the ages.
O
On this day in Blues history

38m ago38m ago
Subscribe
Unsubscribe
매일+
What happened on this date in the history of the Blues?
S
SpyCast

1d ago1d ago
Subscribe
Unsubscribe
매달+
Lexicon Valley is a show about language, from pet peeves, syntax, and etymology to neurolinguistics and the death of languages. Hosted by linguist John McWhorter.
500개 이상의 주제를 청취