To give you the best possible experience, this site uses cookies. Review our Privacy Policy and Terms of Service to learn more. 알았습니다
M
Matthew Felix On Air: People Who Create. People Who Make a Difference.

Matthew Felix On Air: People Who Create. People Who Make a Difference. « »
23 A San Francisco Author in Paris: David Downie

Hmmm there seems to be a problem fetching this series right now. Last successful fetch was on October&nbsp04,&nbsp2019&nbsp02:49 ( 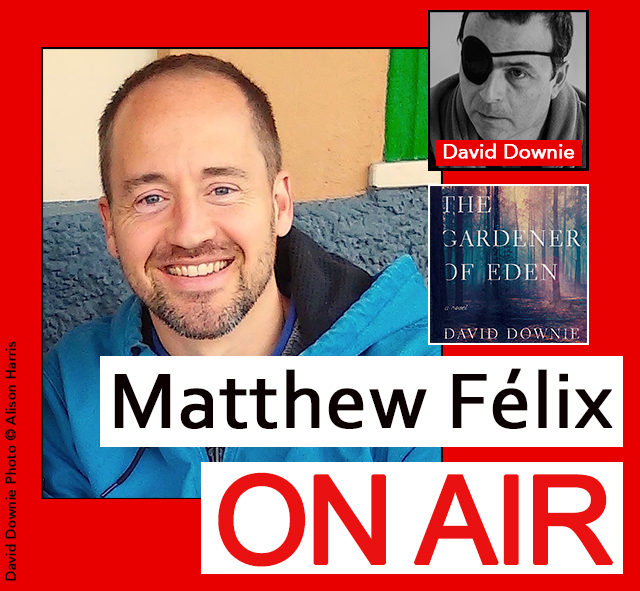 Are you interested in Paris? Do you like suspenseful literary novels? Two unrelated questions, except that on this episode I talked about both with author David Downie.

David is a San Francisco native who has lived in Paris for over thirty years and has written a new novel, The Gardener of Eden, that takes place in the Pacific Northwest. We talked about Paris, his new novel, and much more.

David Downie has written for over 50 publications worldwide including Bon Appétit, The Los Angeles Times, Town & Country Travel, The San Francisco Chronicle, epicurious.com, and Salon.com. He is the author of the critically acclaimed Paris, Paris: Journey into the City of Light, three Terroir guides, as well as several cookbooks and crime novels.

Next show Writer, filmmaker, and LitWings founder Erin Byrne and I chat in Paris, France!

K
Kevin in the Morning with Allie & Jensen on KROQ

2y ago2y ago
Subscribe
Unsubscribe
매달
Bits and segments from Kevin in the Morning with Allie & Jensen.
A
ABC RN Arts

22h ago22h ago
Subscribe
Unsubscribe
매일
Each week day RN Arts programs zoom in on a specific area of art and culture, brought to you by a specialist presenter. Subscribe to their podcasts separately by searching by name in your podcasting app.
T
The Drunken Peasants Podcast

5d ago5d ago
Subscribe
Unsubscribe
주마다+
This is the Drunken Peasants podcast. Bringing you the latest in news, entertainment, politics from an altered perspective.
B
Backseat Rider

2+ y ago2+ y ago
Subscribe
Unsubscribe
매달
Journalist Anthony Ponce goes from the bright lights of a major news network to behind the wheel of a ride-share car, bringing you the real life stories of his passengers. From businessmen and baristas to strippers and students... hear the unique worldviews of people from all walks of life, as Anthony and his riders navigate the streets of Chicago. (interviews are recorded with full knowledge and consent).
W
World Spirituality

3d ago3d ago
Subscribe
Unsubscribe
매달+
Our planet is becoming a global village, yet enormous differences remain in culture and spiritual tradition—differences that can lead to misunderstanding, hatred, and war. Host Paul John Roach and his guests explore the unity and common values shared within all cultures and faith traditions.
S
Short Cuts

12h ago12h ago
Subscribe
Unsubscribe
매일
IDEAS is a deep-dive into contemporary thought and intellectual history. No topic is off-limits. In the age of clickbait and superficial headlines, it's for people who like to think.
P
Post Show Recaps: TV & Movie Podcasts from Josh Wigler and Friends

7h ago7h ago
Subscribe
Unsubscribe
매일+
When your favorite show ends, we’re just getting started. Josh Wigler and friends lead recaps of the biggest TV hits, from genre favorites on HBO to binge-shows on streaming platforms and far beyond. Post Show Recaps comes from veteran entertainment journalist Josh Wigler and Rob Cesternino of Rob Has a Podcast.
T
The John Batchelor Show

16h ago16h ago
Subscribe
Unsubscribe
매일+
The John Batchelor Show is a hard news-analysis radio program on current events, world history, global politics and natural sciences. Based in New York City for two decades, the show has travelled widely to report, from the Middle East to the South Caucasus to the Arabian Peninsula and East Asia.
500개 이상의 주제를 청취