Hmmm there seems to be a problem fetching this series right now. Last successful fetch was on August&nbsp11,&nbsp2022&nbsp12:20 (

The number of couples seeking fertility treatment is rising every year. But donor assisted conception poses huge ethical and human rights issues. Up until 10 years ago, sperm donors and women who donated eggs had a right to remain anonymous. Then the law was changed in 2005 giving donor conceived people the right to information about their donors. Most people agree that this was a milestone to be celebrated, but does it go far enough?

This podcast explores the issues. it is drawn from an event organised by the Progress Educational Trust and is introduced by the Chair of the event, Charles Lister, Chair of the National Gamete Donation Trust, and former Head of Policy at the Human Fertilisation and Embryology Authority. He quoted a speech by the Public Health Minister, Melanie Johnson made in 20014,

This quote encapsulates the essence of the debates that led to the Human Fertilisation and Embryology Authority (Disclosure of Donor Information) Regulations 2004, which allow donor-conceived people born from donations made after 1 April 2005 access to identifying information about their donor on reaching the age of 18. It also set the scene for a series of lively presentations from a panel of five experts, who took to the stage to offer their perspective on the impact of the legislation. 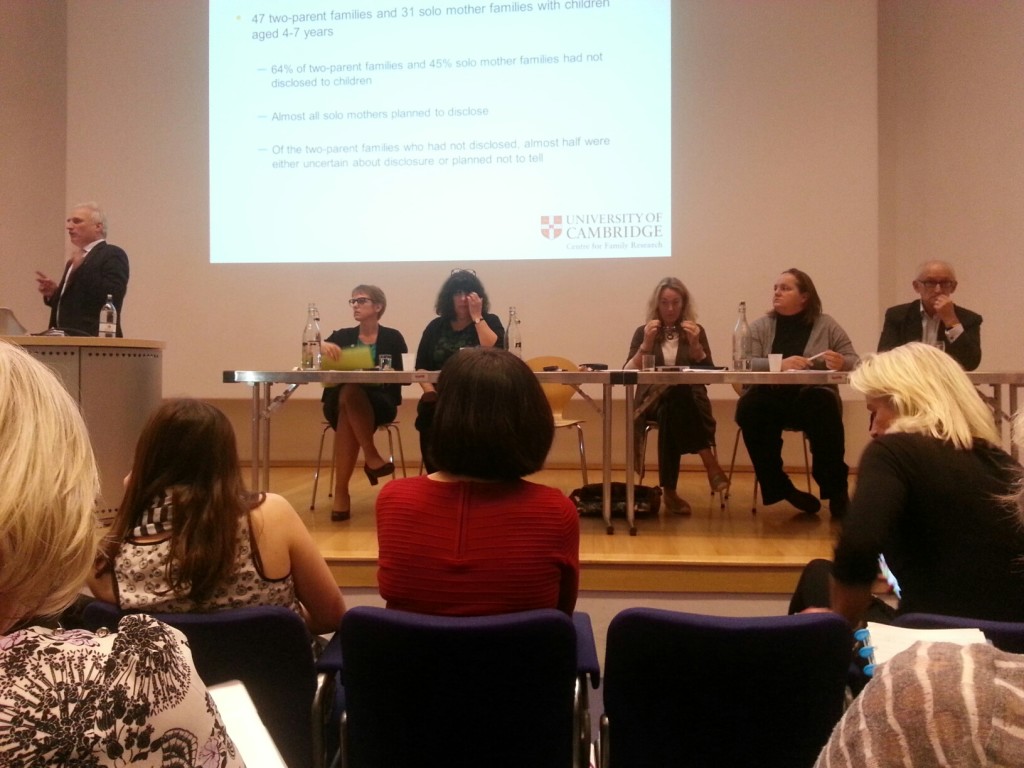 First to speak was Juliet Tizzard, Director of Strategy at the Human Fertilisation and Embryology Authority (HFEA), who gave the regulator’s perspective on the change in law. Tizzard identified the lack of reliable outcome metrics in relation to donor conception as a key challenge, and hindrance, to accurate impact evaluation of the 2004 regulations. She also opined that the assessment of post-regulation sperm and egg donation trend as proxy measure of impact showed a gradual but steady increase in number of new donors registering in the UK – a reality that is a far cry from the doomsday prophecies of the early critics of the law, who predicted the possibility of severe donor shortages arising as a result of the end to donor anonymity.

Next on stage was Dr Jo Rose, a donor-conceived adult who won a landmark court case that contributed to the decision to end donor anonymity in the UK. In her presentation, Rose argued that donor-conceived children should, as a matter of course, have more support and the right to access full and complete information about their genetic parent, particularly because ‘wrong and incomplete medical history kills people’. She also argued that a lack of retrospective access to identifying information means a number of donor-conceived people born before April 2005 live the rest of their lives ‘tortured’ by not knowing who their genetic family is. 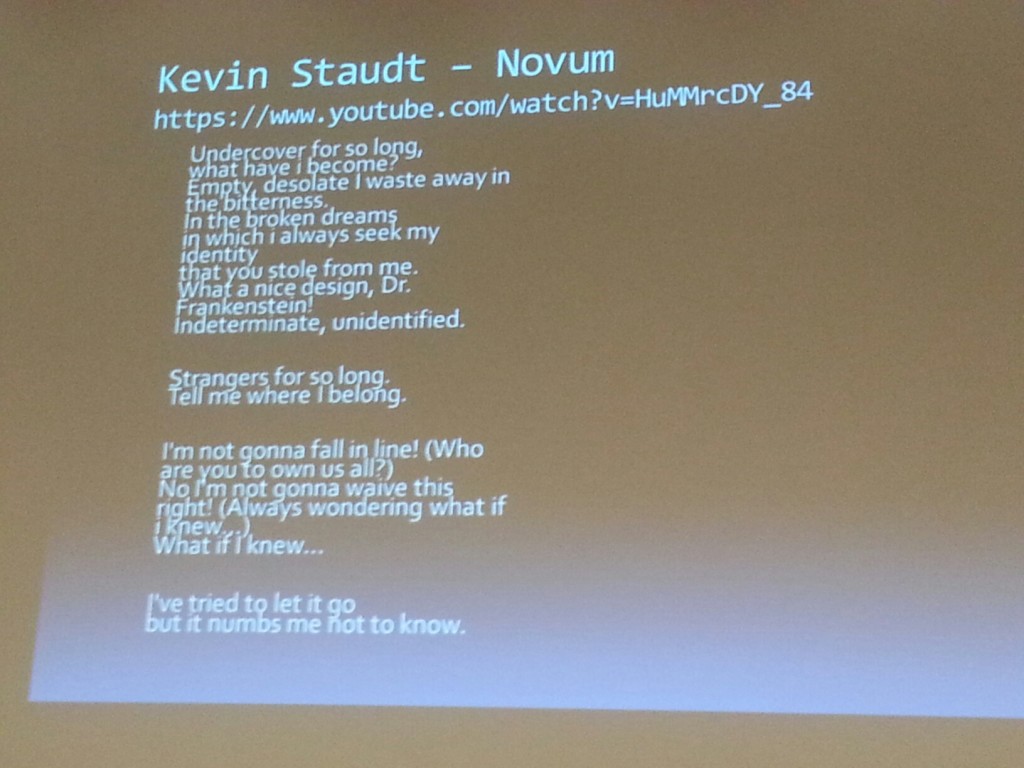 Rose’s presentation gave a personal note to the debate and made it easy to appreciate the rationale behind her call for retrospective disclosure of donor identity. According to her, more needs to be done to ensure ‘equality and respect for genetic kinship and identity for all groups of the society’.

Eric Blyth, Emeritus Professor of Social Work at the University of Huddersfield, also made a case for retrospective disclosure of donor identity. Using data from the HFEA, Professor Blyth argued that the lack of retrospective access to identifying donor information means that upwards of 20,000 donor-conceived people born between 1991–2004 in the UK are denied the right to learn the identify of their donor.

Blyth also argued that, since the data presented by Tizzard showed that more than 150 donors who donated prior to April 2005 have chosen to waive their right to anonymity, protecting donor privacy may not be seen as equally important by all of those donors.

Venessa Smith, the Quality Assurance and Patient Coordinator at the London Women’s Clinic, offered insights from the perspective of the service providers. She reported a change in sperm-donor demography and composition from ‘young men donating for “beer money” pre-2005, to young professional males with families donating purely for altruistic reasons post-2005’. This, she argued, may be attributable to a post-2005 paradigm shift that resulted in a greater focus on the welfare of the donor-conceived child, rather than merely the successful outcome of the assisted reproduction process.

Smith also argued that the routine support and counselling offered to post-2005 donors ensures that ‘donors who do make a donation are the right ones for the patients’. This has contributed to a significant increase in number of donors at the London Sperm Bank and London Egg Bank, she reported, such that patients now have a variety of choice and no longer have to wait long for donors.

The last presenter for the evening was Susan Golombok, Professor of Family Research and Director of the Centre for Family Research at the University of Cambridge. Her presentation focused on the how disclosure of donor conception in the UK had changed over the past 30 years.

Professor Golombok discussed two longitudinal studies. The first followed 111 donor insemination (DI) families who had children born in the mid-1980s, and another conducted some 15 years later followed 50 DI families and 51 egg donor (ED) families. In summary, in the earlier study fewer than 10 percent of parents had disclosed by the age of 18, whereas in the later study 67 percent of ED parents and 41 percent of DI parents had disclosed by the age of 14. So while it was encouraging to learn that the number of parents disclosing has increased, it was also apparent that parents who initially indicated willingness to disclose donor conception to their children did not always go on to do so.

When considering the welfare of the child, it was reassuring that no child responded to disclosure in a negative way, and no parents regretted disclosing.

The panel also fielded some questions from the audience, which centred on the practical aspects of donor disclosure. Emma Cresswell, a donor-conceived adult in the audience, insisted that it was no longer right to withhold information from donor-conceived adults. She argued that disclosure of donor conception should be an ethical duty, a parental responsibility and a legal requirement. She suggested that inclusion of identifying donor information on a donor-conceived child’s birth certificate would guarantee this disclosure.

A number of audience members backed up this call for a review of current legislation to encourage disclosure, as and to remove donor anonymity retrospectively. Others raised questions about the ethics and practicality of enforcing the disclosure of donor conception, and pointed out that retrospectively lifting donor anonymity breaks promises made to people who donated before 2005.

Juliet Tizzard said that, in her view, the best approach was to support parents of donor-conceived children to encourage disclosure, rather than seeking to mandate it. Caroline Spencer, a behavioural psychologist and trustee of the Donor Conception Network, also emphasised the need to educate parents of donor-conceived children on the importance of disclosure while supporting them with practical tools and tips.

By the end of the evening, it was clear that emotions around the debate on donor anonymity run high, that neither the audience nor the panel would reach a consensus, and that issues surrounding donor anonymity and disclosure will continue to be hotly debated.

This article is based on the piece by Arit Udoh in BioNews, the online magazine of Progress Educational Trust.

The post Debating donor conception 10 years after the removal of anonymity appeared first on Pod Academy.

9d ago1w ago
Subscribe
Unsubscribe
매달
In this podcast, German podcaster Annik Rubens talks slowly about topics of everyday German life, from beergardens to recycling. More information and Premium Podcast with learning materials on Slow German at www.slowgerman.com. You can read the complete transcript of each episode on this internet-site or in the ID3-Tags.
B
BackStory

2+ y ago2+ y ago
Subscribe
Unsubscribe
매달
BackStory is a weekly public podcast hosted by U.S. historians Ed Ayers, Brian Balogh, Nathan Connolly and Joanne Freeman. We're based in Charlottesville, Va. at Virginia Humanities. There’s the history you had to learn, and the history you want to learn - that’s where BackStory comes in. Each week BackStory takes a topic that people are talking about and explores it through the lens of American history. Through stories, interviews, and conversations with our listeners, BackStory makes histo ...
T
The History of Rome

5+ y ago5+ y ago
Subscribe
Unsubscribe
매달
A weekly podcast tracing the history of the Roman Empire, beginning with Aeneas's arrival in Italy and ending with the exile of Romulus Augustulus, last Emperor of the Western Roman Empire. Now complete!
K
Kwentuhan Sessions

11d ago1w ago
Subscribe
Unsubscribe
매달+
We are a Filipino-Chinese couple living in the heart of Manila. We have been together for 20 years and decided to make this podcast to share our life experiences. Our podcast has no format and may discuss random things like relationships, recommended food in Binondo or about our philosophy in life. If you like our podcast, don’t forget to click the subscribe/follow button and give us a 5 star rating ^.^ Please visit our FB page @kwentuhansessionsph and ig page @kwentuhansession. You can also ...
I
IELTS Podcast

1d ago1d ago
Subscribe
Unsubscribe
매일
TED is a nonprofit devoted to ideas worth spreading. On this video feed, you'll find TED Talks to inspire, intrigue and stir the imagination from some of the world's leading thinkers and doers, speaking from the stage at TED conferences, TEDx events and partner events around the world. This podcast is also available in high-def video and audio-only formats.
S
Smart People Podcast

8d ago1w ago
Subscribe
Unsubscribe
매달+
Smart People Podcast is a biweekly, interview-based podcast that features today's most well respected thought leaders engaging in authentic, insightful conversation for the benefit of the listener. The host, Chris Stemp, and his co-host/producer Jon Rojas, utilize their insatiable curiosity and relatable charm to provoke their guests into giving the interview of a lifetime. Every single guest has achieved a high level of recognition within their arena and in doing so has collected a wealth o ...
T
The Premium Pete Show

2d ago2d ago
Subscribe
Unsubscribe
매달+
Early in his career, the renaissance man, Premium Pete pioneered the podcasting industry as co-host of the iconic hip-hop program, The Combat Jack Show. In addition to producing podcasts for several major brands such as State Farm, Foot Locker, and HBO. Premium Pete created his own outlet with The Premium Pete Show. Having a respected voice and being an influential entrepreneur, it only made sense for the goodfella to provide a platform for his guests to tell their stories. Internets! The Pr ...
M
Move Your DNA with Katy Bowman

11d ago1w ago
Subscribe
Unsubscribe
매달
Although the world is becoming mostly sedentary, our bodies still require a wide variety of daily movements in order to work well. Many of us struggle to get regular exercise, but even that can fall short of nourishing the body from head to toe. How can we move more—a lot more—when we have sore, stiff parts and overly busy lifestyles? Join Katy Bowman M.S., biomechanist, author, and movement educator as she combines big-picture lessons on biomechanics, kinesiology, physiology, and natural hu ...
T
The Rachel Hollis Podcast

6h ago6h ago
Subscribe
Unsubscribe
주마다+
From New York Times best-selling author Rachel Hollis comes the ultimate podcast for anyone looking for more joy and purpose in their lives. Featuring candid interviews with top performers in business, media, and lifestyle, as well as deep dives into topics like health and motivation, The Rachel Hollis Podcast has everything you need to level up your life! New episodes premiere every Tuesday and Thursday.
500개 이상의 주제를 청취