Hmmm there seems to be a problem fetching this series right now. Last successful fetch was on August&nbsp11,&nbsp2022&nbsp12:20 (

The internet has long been seen as a force of global connection, But this notion of a global internet has never been entirely accurate. Language barriers, access limitations, censorship and the human impulse to stay within your own social circles contribute to us staying local. And then there is the larger architecture of the internet. This podcast looks at at how this architecture, specifically the Domain Name System (DNS) has been used and developed in China to localize control there.

In this podcast, Adriene Lilly talks to Séverine Arsène, a researcher at the French Centre for Research on Contemporary China in Hong Kong and Chief Editor of China Perspectives – a journal dedicated to cultural, political and economic trends in China. She is also author of the recent article Internet Domain Names in China: Articulating Local Control with Global Connectivity part of a special feature of China Perspectives ‘Shaping the Chinese Internet’
The internet has long been seen as a force of global connection, bringing together people of different cultural, political and economic backgrounds. Understood as a horizontal network and a community that is structurally decentralized. But this notion of a global internet has never been entirely accurate. Language barriers, access limitations, censorship and the human impulse to stay within your own social circles contribute to us staying local. Beyond social constraints, there is the larger architecture of the internet to take into account. Essential structures that hold the internet in place, yet remain mostly unknown. Today, we’re looking at how this architecture has been used and developed in China to localize control there.
Understanding the Domain Names System is a big step in understanding the architecture of the internet. The Domain Names System, or DNS, is the global addressing system for the internet. You can think of the DNS like a phonebook. It takes numbers (IP addresses) and attributes them to names (domain names). When you type in an address in your browser (i.e.podacademy.org) your using the DNS to look up and call the number in this global phonebook. This global system is coordinated by the Internet Corporation for Assigned Names and Numbers or ICANN.
China was a major pioneer in using the DNS as a political tool, creating a vast web of regulation, censorship and blocking. This has been an evolving system since the early days of the internet, and continues to change to this day. Only last month,a new draft law was reported that could force website owners operating in China to apply for China-base domain names – this means websites ending in .com or .net must also register with .cn or Chinese character domain names like .中国(meaning “.China”) or .公司 (meaning “.Corporation”). Like many similar regulations, the draft of this law is vague in its wording and its exact implications are yet to be seen. In this episode Séverine discusses how laws like this have evolved over time and what they might really mean.
“The very point of using the DNS to block particular websites, or using keyword filtering, is to have a selective blocking or a selective connection to the global internet. It enables the Chinese state to have the best of both. The best of the global internet: access to trade, to fashion trends, to self-expression in a certain way – it helps people to vent off, express their identities, their wills, without necessarily being critical about the state of their own country. And, at the same time is allows a certain amount of political control…”
This selective access has become known as ‘The Great Firewall of China.’ The term can be misleading, implying an internet that is structurally isolated from the rest of the world when, in reality, it is more a ‘selective’ access.
“…the term “Great Firewall” was invented at the end of the 1990s/2000s, it is a very powerful image to represent a separated network that would be really very different than the rest of the world’s internet. So it was a very successful image. Until now, it’s still very classic to use the notion of the Great Firewall to represent the Chinese internet. […] in fact, it would not be very difficult to separate the Chinese internet from the rest of the world. They have done this at the region level, like they did in Xinjiang after the riots in 2008. […] For that, you don’t need to use the DNS, you don’t need to filter keywords or anything. You just need to tell the ISP’s (Internet Service Providers) to stop providing service.”
Beyond the political implications DNS blocking, censorship and keyword filtering can effect economic issues. For example by blocking established social media sites like Facebook Chinese alternatives have more room to develop.
“The censorship that is done in China has been very often criticized for being mostly against Foreign competitors of the Chinese internet services. For example when Google was struggling in the Chinese market in the beginning of the 2000s they had to decide if they still wanted a google.cn or not. It was said that the political pressure that the Chinese government was putting on them to censor their search results was also aimed at putting their competitor,Baidu, in a more favorable position. In the same way, all the companies that have been blocked in China, like Facebook like twitter, gave room for Chinese competitors and copycats to grow and take that room. And so the censorship that blocks a particular websites through its domain name or through its IP address has often been seen as a way to provide room for the development of a domestic industry in the development of the internet….” 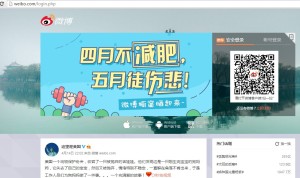 Throughout the episode Séverine discusses the structure of the Chinese internet and the implications that is has globally. Noting that while China may have pioneered many of the techniques used for censorship and DNS blocking they are not the only country currently using them. This includes nations like the United States, Australia and the UK, all of which employ various regulations online.
“…this all reminds us that the internet is not really displayed in the same way for everyone person in the world, it really depends on where you’re situated So this all reminds us that the internet is not entirely in a limbo, it’s not an entirely virtual territory where no laws would apply. On the contrary many laws apply. Because the internet has material infrastructure it has copper wires, fiber optics wires, and routers all of which are situated materially within territories, it has companies and institutions that are subject to the laws of a territory and it has people. It has employees and users who are also subject to the laws of the countries where they are located. So there are in fact many laws that can apply and that’s a great leverage for every country’s government to act and to impose constraints on our behavior online.”
Original artwork by Tiana Tucker

9d ago1w ago
Subscribe
Unsubscribe
매달
In this podcast, German podcaster Annik Rubens talks slowly about topics of everyday German life, from beergardens to recycling. More information and Premium Podcast with learning materials on Slow German at www.slowgerman.com. You can read the complete transcript of each episode on this internet-site or in the ID3-Tags.
B
BackStory

2+ y ago2+ y ago
Subscribe
Unsubscribe
매달
BackStory is a weekly public podcast hosted by U.S. historians Ed Ayers, Brian Balogh, Nathan Connolly and Joanne Freeman. We're based in Charlottesville, Va. at Virginia Humanities. There’s the history you had to learn, and the history you want to learn - that’s where BackStory comes in. Each week BackStory takes a topic that people are talking about and explores it through the lens of American history. Through stories, interviews, and conversations with our listeners, BackStory makes histo ...
T
The History of Rome

5+ y ago5+ y ago
Subscribe
Unsubscribe
매달
A weekly podcast tracing the history of the Roman Empire, beginning with Aeneas's arrival in Italy and ending with the exile of Romulus Augustulus, last Emperor of the Western Roman Empire. Now complete!
K
Kwentuhan Sessions

11d ago1w ago
Subscribe
Unsubscribe
매달+
We are a Filipino-Chinese couple living in the heart of Manila. We have been together for 20 years and decided to make this podcast to share our life experiences. Our podcast has no format and may discuss random things like relationships, recommended food in Binondo or about our philosophy in life. If you like our podcast, don’t forget to click the subscribe/follow button and give us a 5 star rating ^.^ Please visit our FB page @kwentuhansessionsph and ig page @kwentuhansession. You can also ...
I
IELTS Podcast

1d ago1d ago
Subscribe
Unsubscribe
매일
TED is a nonprofit devoted to ideas worth spreading. On this video feed, you'll find TED Talks to inspire, intrigue and stir the imagination from some of the world's leading thinkers and doers, speaking from the stage at TED conferences, TEDx events and partner events around the world. This podcast is also available in high-def video and audio-only formats.
S
Smart People Podcast

8d ago1w ago
Subscribe
Unsubscribe
매달+
Smart People Podcast is a biweekly, interview-based podcast that features today's most well respected thought leaders engaging in authentic, insightful conversation for the benefit of the listener. The host, Chris Stemp, and his co-host/producer Jon Rojas, utilize their insatiable curiosity and relatable charm to provoke their guests into giving the interview of a lifetime. Every single guest has achieved a high level of recognition within their arena and in doing so has collected a wealth o ...
T
The Premium Pete Show

2d ago2d ago
Subscribe
Unsubscribe
매달+
Early in his career, the renaissance man, Premium Pete pioneered the podcasting industry as co-host of the iconic hip-hop program, The Combat Jack Show. In addition to producing podcasts for several major brands such as State Farm, Foot Locker, and HBO. Premium Pete created his own outlet with The Premium Pete Show. Having a respected voice and being an influential entrepreneur, it only made sense for the goodfella to provide a platform for his guests to tell their stories. Internets! The Pr ...
M
Move Your DNA with Katy Bowman

11d ago1w ago
Subscribe
Unsubscribe
매달
Although the world is becoming mostly sedentary, our bodies still require a wide variety of daily movements in order to work well. Many of us struggle to get regular exercise, but even that can fall short of nourishing the body from head to toe. How can we move more—a lot more—when we have sore, stiff parts and overly busy lifestyles? Join Katy Bowman M.S., biomechanist, author, and movement educator as she combines big-picture lessons on biomechanics, kinesiology, physiology, and natural hu ...
T
The Rachel Hollis Podcast

6h ago6h ago
Subscribe
Unsubscribe
주마다+
From New York Times best-selling author Rachel Hollis comes the ultimate podcast for anyone looking for more joy and purpose in their lives. Featuring candid interviews with top performers in business, media, and lifestyle, as well as deep dives into topics like health and motivation, The Rachel Hollis Podcast has everything you need to level up your life! New episodes premiere every Tuesday and Thursday.
500개 이상의 주제를 청취